The Amazing Everything Wiki
Register
Don't have an account?
Sign In
Advertisement
in: Male, People, Persons with gigantism,
and 3 more

View source
watch 01:36
We're Getting Mutants in the MCU - The Loop
Do you like this video?
Play Sound 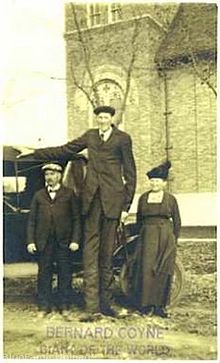 Coyne was the tallest ever eunuchoidal infantile giant, a condition also known as Daddy Long-Legs Syndrome. He was the tallest person in the world at the time of his death when, like Robert Wadlow, he was still growing. He reportedly wore size 25 (American) shoes.

Bernard Coyne died of hardening of the liver and of a glandular disorder on May 20, 1921. He is buried in Anthon, Iowa, in a specially-made, extra-large coffin.

Community content is available under CC-BY-SA unless otherwise noted.
Advertisement