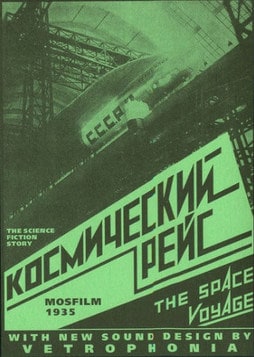 In the year 1946, the Soviet space program is undergoing turmoil. Professor Sedikh, who is planning to lead the first manned exploration to the moon, is denounced by his rival Professor Karin as being too old and too mentally unstable for the mission. Professor Sedikh, aided by his assistant Marina and a youth named Andryusha, disregard Prof. Karin’s authority and make a successful landing on the moon. Although a few problems occur at the moon, including the discovery of a damaged oxygen tank and Professor Sedikh’s becoming trapped under a fallen boulder, the expedition is a success and the cosmonauts return to Moscow.

The film was produced by Mosfilm and first conceived in 1924.

Retrieved from "https://amazing-everything.fandom.com/wiki/Space_Flight:_The_Cosmic_Voyage_(1936_film)?oldid=59695"
Community content is available under CC-BY-SA unless otherwise noted.